The event was fantastic. All of the speakers were from different backgrounds and had very different styles and stories, but I would say that everyone in the audience clicked with at least one or more of them. There was a lot of excitement from the students. I would really recommend them to any school.

How did you hear about F4S?

I first heard of Founders4Schools from a colleague in the tech industry that I was working with. He is an advisor for Founders4Schools, and when I told him I am a teacher, he mentioned the organisation to me, and I reached out to them via email.

What made you decide to use the Founders4Schools service?

The concept sounded great to me. Being a Teach First ambassador, my passion is to raise the aspirations of young people. I often ask my pupils “What would you like to do in the future?” Sadly, in most cases, pupils have no idea; don’t seem passionate or enthused about their future; or just see themselves doing something very unambitious for the rest of their lives. The service that F4S provided seemed like an excellent way to help change pupils’ mind-sets. I found the Founders4Schools team extremely helpful in answering my questions and following up with me on information I needed. I had to get the event authorised at my school, and having someone available to answer my questions made the process much easier. 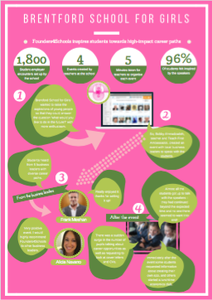 What was the process of creating an event like for you?

Creating the event was really easy, and again, that’s important because as a teacher there are many demands on your time. It was great to be able to see the speakers and their profiles online and choose who I wanted to invite into the classroom. We are an all-girls school so I was able to invite some extremely successful women. For the next event that I am planning with F4S, I hope to invite speakers that share similar interests and backgrounds to our students.

How did the event go?

The event was fantastic. I was a bit nervous because we were holding the event after school and I was promoting it in different assemblies to make sure students would show up - but the turnout was great. All of the speakers were from different backgrounds and had very different styles and stories, but I would say that everyone in the audience clicked with at least one or more of the founders, which is the great thing about having a group of four speakers. At the end of the event, I would say that about 80 percent of the students got up to talk with the speakers, which was amazing. They had continued well beyond the expected time and no one there seemed to want it to end!

What was the immediate impact of the programme?

The feedback I received from students regarding the event I planned via F4S far surpassed any expectations that my colleagues and I had. There was a lot of excitement from the students. Two students approached me and said they had an idea for an app they wanted to make, and I was able to refer them to resources and next steps to explore their idea. As the subject leader of economics, most of my qualitative data will come from the perspective of my economics pupils. Some of my students were applying for LSE Choice and others were looking into Economics summer school programmes. Several successful students attain places on these competitive courses. There was a sudden surge in the number of pupils talking to me about career opportunities as well as requests to look at cover letters and CVs.

They were interested in applying for things and seeing what they could do beyond just the classroom. For example, one group of pupils started planning a lunch-time economics club to help support the new AS economics group. This exciting venture is set to begin next term.Based on the 6th-Form applications, the intake of pupils in the economics department is expected to rise from 25 pupils to 51 pupils. This is an unprecedented growth in any subject area at Key Stage 5. There are certainly many factors that influence a surge in interest for the subject. However, I am sure that the F4S event did play a big part in this. And the positive feedback extended to teachers - we were all really inspired that people like that cared enough to come in to talk to students. It showed us that even people that have made it really want to help other people.

What surprised you the most from the event?

I was excited by how well it went and how positive the reactions were. Several experienced members of staff at our school that often organise public speaking events said they had never seen an event so amazing! It was extremely impactful, and the variety and caliber of people took our breath away. Their stories were relatable and personable. They really cared about making pupils feel at ease while trying to answers any questions that they had. I would really recommend them to any school. It surprised me how easy it was to set up the event. I only wish I could convince more teachers of this! Most of us are so busy that we don’t want to look at new things. A member of the leadership team asked me plan another event for our new Year 11 group this coming September. It took me about 10 minutes to send invites for the event online via the F4S website. Now I am just eagerly waiting to see who will be visiting us next at Brentford!

Maitri, one of the students attending the event approached F4S for an internship. She worked on an idea for an app and helped with database coding. The F4S event and her work experience led her to change her university subject of study from History to Computer Science.

We use necessary cookies to make our site work. We’d also like to set optional analytics cookies to help us know how you use our website, which improves your online experience and our services.

Strictly Necessary Cookies: These enable core functionality such as logging in and volunteer search preferences. You may disable these by changing your browser settings, but this will affect how the website functions.